In that first year in Kildonan, Isabella and Alexander struggled with a big house, managing a glebe and a farm, contracting debts, and their two young children. It also fell to them to manage a building project. The old chapel was heather-thatched and housed the burial place of the chiefs of the clan Gunn. The new church was erected on the same site, just down from the manse so Isabella, with Betty and Jane, would have watched the walls rise each day. That first year must have been exhausting for Isabella. Not only was she managing the house, probably significant parts of the farm, trying to improve the poor impression Alexander had made on the parishioners, and raising the girls, but she was again pregnant. Just over a year after their move Angus, or Aeneas, was born. This first son was named, as tradition dictated, after his paternal grandfather. Slightly more than another year later, in October 1789, Isabella gave birth to another boy in the manse at Kildonan: Donald, named after her father. Isabella, perhaps unable to feed the babies herself, or perhaps to assist with childcare, or perhaps to build up relationships locally in the traditional way through fosterage, perhaps all three, sent both boys out to be nursed. Marion Polson, married to the parish catechist, took in Angus. Donald was sent to Barbara Corbett who lived with her husband at Lonn-riabhach, near the rock of Marrel. Donald was very fond of Barbara’s care and the family connection persisted to the next generation when Donald employed her daughter Barbara, his foster-sister, as his servant. Isabella’s decision was not at the expense of loving ties with the boys. It seems that after they were weaned they largely lived at home again and Donald remembered Isabella’s tender attitude to him when he was a petulant toddler. 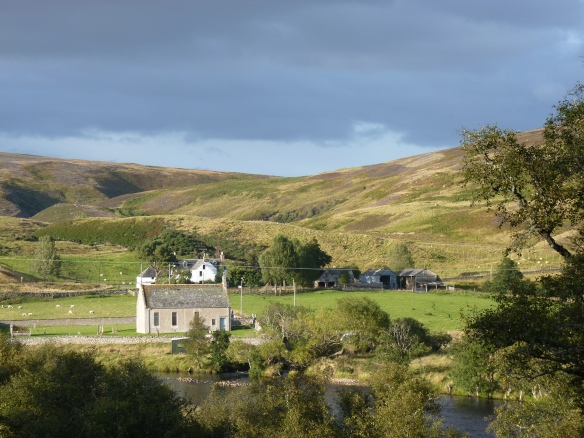 The new Kildonan church building with the manse (significantly refurbished!) behind. The ruins of the township of Kirkton are just to the right of the present farm buildings. Photo: Marjory Harper

The three year old’s demands were part of daily life as the dank November days closed in around Kildonan’s manse in 1792. Having lost a baby since Donald’s birth, Isabella was again pregnant. There were four children under the age of seven in the big smoky, dusty house, and the new baby was due at the end of the month. Her contractions began on the 26th or 27th. When labour really took hold she retired to one of the east-facing bedrooms. Someone would have sent word to the local midwife. There may have been one living in Kirkton, just a few minutes up the road, or she may have come from one of the further off townships. Several women would have gathered at the manse. Marion Polson and Barbara Corbett might have been there, and any other friends or near neighbours, all of whom would have had experience helping each other give birth. Things did not go well. The baby died and Isabella was losing a lot of blood. It became clear that she was not going to make it through the night. About an hour before she died, all the children were called to her bedside so she could see them and bless them. Donald later recalled that he was her favourite and he was told that she took particular notice of him that evening. Her feelings choked her as she prayed that he ‘might yet be useful in the vineyard of Christ.’ He did not remember the deathbed scene, but he did remember creeping in to her room a few hours after Isabella had died.

‘On the bed lay extended, with a motionless stillness which both surprised and terrified me, one whom I at once knew to be my mother. I was sure it was she, although she lay so still and silent. She appeared to me to be covered with a white sheet or robe; white leather gloves were on her hands, which lay crossed over her body.’

Alexander was sitting in the corner. He had been quietly weeping. When he caught sight of his little boy, the favourite son of his Isabella, the floodgates opened. He caught hold of Donald, his whole body shaking and the tears rolling down his face. Donald didn’t know that grown men could cry and, as his father held him he stared at Isabella’s body, her gloved hands engraving on his memory. Isabella was forty two. Alexander buried her by the wall of the church building that she had watched grow out of the ground a few years earlier.

Isabella’s children were given the loving mothering they needed for the next few years by Eppy, a servant. Within two years Alexander had found a new wife. She was a local woman, Jean Sutherland of Midgarty. Isabella’s boys stayed at home, being educated by the parish schoolmaster and by their father until they turned twelve and thirteen when Alexander took them to school in Dornoch. Doubtless largely due to Isabella’s smoothing over his early difficulties, Alexander eventually became a well-respected and loved minister in Kildonan. Today he lies beside his church, between his Jean and his Isabella. 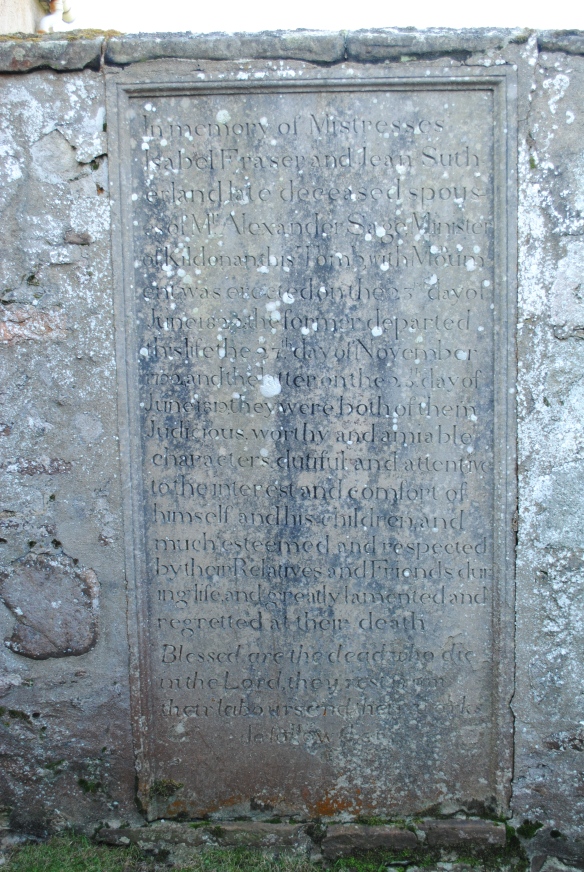