To commemorate the bicentenary of the emigration of Kildonan people to Red River, Canada, we have the contributions of two guest bloggers. This week Professor Marjory Harper of the University of Aberdeen writes about the impact of the Kildonan people in what is now Manitoba, and how they are remembered today.

Winnipeg is a city of monuments and memorials to the Highland pioneers who in the early nineteenth century established themselves at the junction of the Red and Assiniboine Rivers. None could have foreseen at the time that the tiny Red River colony, conceived by Thomas Douglas, fifth Earl of Selkirk, and populated most notably by emigrants from the Strath of Kildonan, would before the end of the century become the capital of a vast province, a major transportation hub at the centre of Canada, and the gateway to the prairies.

Tiny as it was, the infant Red River settlement was mired in controversy on both sides of the Atlantic. In June 1813, Lord Selkirk himself was present in Stromness to witness the embarkation of a contingent of 100 individuals from Sutherland. The second group of colonists to leave Scotland, many were victims of the savage Kildonan clearances, orchestrated by William Young and Patrick Sellar, and they had been selected from 700 applicants who saw no future in their native land. It was not long before they had a taste of the hazards of transatlantic travel, when typhus broke out on the ship, and a panic-stricken captain landed them, not at York Factory, where they had been expected, but 150 miles away at Fort Churchill. By the time they reached Red River, in August 1814, more than a year had elapsed since leaving Scotland.

The arrival of the Kildonan exiles ignited smouldering tensions between the rival fur trading enterprises of the Hudson’s Bay Company and the North West Company. While the Napoleonic conflict raged on in Europe, Scots squared up to each other in their own “pemmican war”, over who would have access to the supplies of buffalo meat which were so essential to the survival of the fur traders operating in the vast territory then known as Rupert’s Land.

By 1816, when the Battle of Seven Oaks (now part of Winnipeg) determined that the Hudson’s Bay Company traders would emerge as victors from that struggle, the Kildonan pioneers had been joined by another wave of emigrants from the strath. A year later they were visited by Lord Selkirk, who earmarked land for a church as well as an experimental farm, and promised the settlers a Gaelic-speaking minister.

In the event, it was more than thirty years before they secured their minister, the non-Gaelic-speaking John Black from Eskdalemuir in Dumfries-shire. His appointment in 1851 triggered the construction of the church, which was completed in 1854 and is today the oldest stone church still standing in Winnipeg. Its location is very different from the depopulated but picturesque environment of its Sutherland counterpart, after which it is named, for it is to be found on the northern outskirts of Manitoba’s capital, adjacent to a busy highway and backed by the wide Red River.

There are, however, several similarities between the two Kildonan churches which are separated by 5,000 miles of ocean and continent. Neither is now in regular use as a place of worship, but each is preserved as a heritage site. Gravestone inscriptions that surround each building commemorate the individuals and families who shaped the histories of their hinterlands, while a plaque on the east wall of the Sutherland church memorialises George Bannerman, one of the Selkirk emigrants who was evicted from the strath in 1813 and whose great-grandson, John Diefenbaker, was Canada’s prime minister from 1957 to 1963. 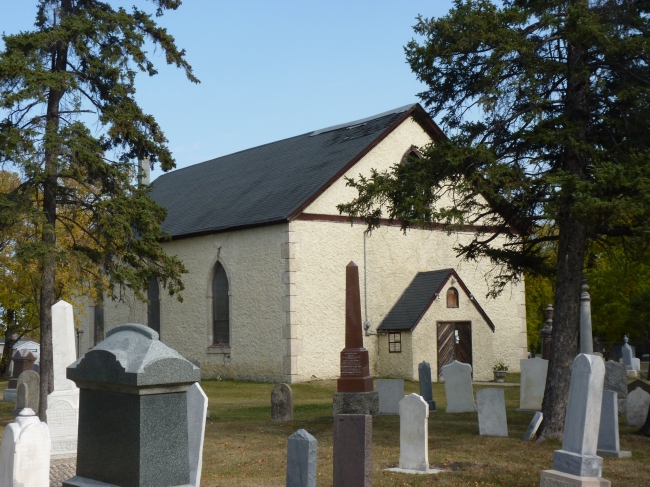 Kildonan Church in Sutherland and Manitoba. Photos by Marjory Harper

Interred alongside the pioneers of Winnipeg’s Kildonan are the Canadian clergyman, historian and novelist Charles Gordon (better known as Ralph Connor) and his wife. Gordon’s “Glengarry” novels, which were best-sellers on both sides of the Atlantic in the early twentieth century, highlight the integrity and resilience of Scottish pioneers in another part of Canada, Glengarry County in Eastern Ontario, where Connor’s father, an emigrant from Perthshire, was also a minister.

Perhaps the best-known Sutherland memorial in Winnipeg is the Selkirk Settlers’ Monument, a full-scale bronze replica of the Emigrants’ Status in Helmsdale, which was unveiled in September 2008, fourteen months after its Scottish twin. The Lord Selkirk Association of Rupert’s Land has ensured that the settlers’ story is also remembered in cairns, plaques and monuments scattered throughout the city.

But let’s return, finally to the Kildonan Presbyterian Cemetery. These stanzas from the Reverend John Mackay’s poem, Old Kildonan – despite some poetic licence in terms of the reference to the steeple – encapsulate the spirit of the cleared pioneers.

Have you been to old Kildonan
Seen the Red with gentle sweep
Guard the little rude, God’s Acre
Where the Selkirk settlers sleep?
Have you read the simple stories
On those headstones, old and grey,
Telling of a deep heart-hunger
For a dear land fear away?
Where the homes they left forever
Stand beside the Northern Sea,
And the old church lifts its steeple
Over heather, hill and lea.