Sue Higgins is curator at Dornoch’s Historylinks Museum.  She has a particular interest in education in the region.

There is a possibility that the art of teaching in Dornoch dates back as far as the 6th century A.D. when it is reputed that St Finbarr established an ecclesiastical foundation on Schoolhill.  If this were the case it is likely that the pupils were boys who learned Latin and Greek.

In the mid-thirteenth century the newly built cathedral opened a cathedral school.  The curriculum would have been similar, but would have included singing for worship.  It is likely that a school continued there until just after the Reformation and after the MacKays burnt the cathedral, when we know it was moved to the Town House.  The Town House has long since vanished but was situated near the Mercat Cross on the High Street.  The school remained there until 1589 when, due to the dilapidated state of the Town House, a move back to the cathedral was necessitated.

With the bestowing of Royal Burgh status on the town in 1628 a new Town House was built.  This again housed the school but by 1730 was in such disrepair that the school went back to the semi-ruinous cathedral.  The move was short lived as by 1738 the Town House was restored by the Earl of Sutherland and the school could return.

By the mid-eighteenth century the small county town boasted three schools.  The Master of the Grammar school earned 200 marks each year receiving an additional £2.8 shillings for each ‘poor scholar’.  In all probability this was the school at the Town House and was where Donald Sage attended from 1801-1803 (see posts from February 2013).  The Mistress of the ‘English’ school was paid 6 shillings per quarter per pupil, and the Teacher of the elementary school received £1 per ‘poor scholar’.  Teachers’ income partly relied on the number of pupils they had and how prompt parents were in paying their fees!

By 1815 the Grammar school had moved into the newly renovated Castle which also housed the County Jail.  The school was on the first floor and the floors above housed the prisoners.  The building proved to be inadequate for both so, sometime before 1845, a new school building was constructed on Schoolhill (now the Social Club) and the new jail, currently a shop, was built in 1844.

By 1845 there were again three schools in Dornoch.  The Parish school was at Schoolhill; a female S.S.P.C.K. (Society in Scotland for Propagating Christian Knowledge) school was on the site of St Finbarr’s charity shop, and taught basic literacy, Scripture and ‘female skills’ like spinning; and there was a private female school.  In 1848, following the Disruption of the Church of Scotland, the Free Church added one more educational establishment.

Supply had overtaken demand and in 1857 the Free Church school was amalgamated with the Parish school.  The S.S.P.C.K. school followed suit by 1884.  Over the coming years numbers grew and the school on Schoolhill overflowed into the old Free Church and S.S.P.C.K. premises.  The time had come for a new Academy.  Moving out of the centre of town, in 1913 it was built on the edge of green fields.  It is still home to the Nursery and Primary school and they celebrated their centenary last year with a production of ‘Oliver’ involving all the pupils. 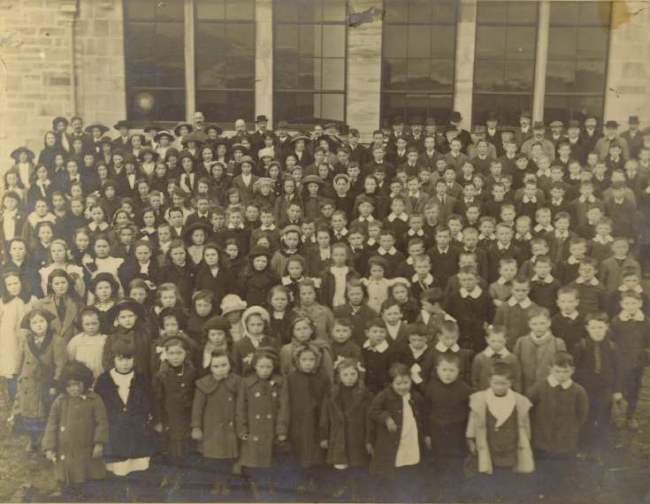 During the mid-twentieth century the increasing population of Dornoch and the closure of many smaller schools in the area meant another building.  A new Academy was built for the older pupils in 1963 and opened by H.R.H. the Queen Mother.  The Academy celebrated its 50th anniversary last year.

The Academy continued to serve the whole of Sutherland, including the north and west coasts.  To house these children two hostels were opened.  Ross House Girls’ Hostel is now the site of North Highland College.  It was originally built by Robert Hamilton Bruce in the late 1890’s as a family home and was called Abden House.  It was transformed into a private hotel before becoming the hostel.  Girls from locations such as Lochinver, Tongue, Lairg and Durness stayed here during term times. In the early days of the hostels students were only able to go home at the end of each term but later on were able to journey home for weekends.  Earls Cross Hostel was for the boys.  Again it was initially a private house, built in 1913 for J.B. Muir, a prominent yacht builder from Clydeside.  It was requisitioned during the Second World War to house soldiers and had a German prisoner of war camp in the grounds.  In 1949 the house was converted to a hostel and continued in this role until as late as 1992.