Malcolm Bangor-Jones continues with his investigation of cholera in east Sutherland.

According to the Rev Kennedy of Dornoch everywhere was “all in a bustle.” He had addressed his congregation not only on the cholera as “a visitation of Divine Providence; but also on the use of means, in reliance on the divine blessing, to arrest its progress”. Dornoch had not had such a thorough cleaning for at least half a century. But the “the poverty and wretchedness of the great body of the Inhabitants of this place is extreme.” In many parts of the landward parish the situation was not much better.

The Rogart committee comprised: Mr John Polson, Rovie; George Gunn Esq, Rhives; Patrick Sellar Esq, Morvich; Captain John Mackay, Davochbeg; Dr William Ross, Cambusmore; and Rev John Mackenzie. The minister reported that the committee had met on 9 December and appointed four men to inspect all premises and direct the inhabitants to clean their houses, whitewash the walls with lime, scour their furniture and bedding if necessary, remove dunghills, pigsties, and every kind of filth to a suitable distance from the house and drain off stagnant water. Copies of a printed circular had been handed round and its nature explained in Gaelic from the pulpit. House visits commenced on 21 December and were completed on 19 January. In mid-February each parish was divided into districts and additional men appointed to assist the committee.

The people were most willing to comply with the instructions which had been issued and there were very few who had refused. The minister could not conceal “that the appearances of poverty about some of them were striking; and that aid, to improve their diet and clothing, is as essentially necessary, as the enforcing of cleanliness, to defend them from the influence of contagious disease.”

Sellar, who had been a most efficient member of the Rogart committee – especially in advising people how to form drains around their houses – admitted that he had been among the poor people in the parish more than he had been for 16 years. Some army pensioners and road contractors living in new houses near the road were “very comfortable”. However, Sellar was certain that “there is a deal of poverty and Silent suffering among the sort of farmers [or small tenants].” He suggested that three quarters of them might be assisted to emigrate and the holdings made six times larger. However, he recognised that Lord and Lady Stafford might not wish to pursue such a course. In the meantime, some blankets and meal would help to relive human suffering. He could not resist asking the Sutherland estates Commissioner, “What would have been your case to day had the whole vale of Golspie and Aberscross, Kildonan, Strathbrora & Strathnaver &ca been filled with ‘palmers’ [beggars] of the same Cast?” These areas had been cleared of most of their inhabitants, and replaced by more commercially profitable sheep, by him a decade or two previously, to much criticism. 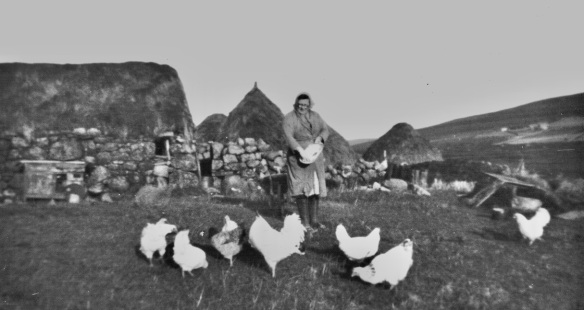 It was noticeable that there was “more misery & appearance of poverty” in Langwell than in all the rest of Rogart. Langwell then belonged to Dempster of Skibo. A separate report noted that many of the tenants on the Skibo estate as a whole were indifferent about the state of their houses. There were a few houses about Skibo itself which were “remarkably well-ordered and clean; but these were inhabited by rather respectable people, who have always clean houses.”

At the end of January the Rogart Committee reported that inhabitants had, with very few exceptions, complied with the instructions as to cleanliness. But to prevent cholera two things were necessary: the complete enforcement of the county injunctions; and affording some relief to a limited number of indigent persons whom the committee found “to be so miserably fed and clothed that they must be in the greatest degree liable to the influence of epidemic disease of every sort.”

The prevailing view was that each landlord should help the inhabitants on their own estate. By the end of February many yards of flannel and numerous pairs of blankets had been bought for the Sutherland estate. Meal was provided as an improvement in diet was considered to be “an important ingredient in the removal of predisposition to cholera”. Medical supplies were also obtained.