Graham Hannaford completed his MLitt in the History of the Highlands and Islands at UHI in 2015, studying from Australia. He is now embarking on a PhD with Federation University, Australia.

Scattered across the world like autumn leaves on a lawn are place names that suggest the presence of a home-sick Scot. Nova Scotia and Nouvelle Caledonie are well known, as are some on the eastern side of Australia in New South Wales: towns like Glen Innes, Aberdeen or Scone, or the Sutherland Shire in the south-east of Sydney. Others are tucked away in what must have seemed like the great emptiness of the Australian bush, places like Golspie, New South Wales. Golspie today is not even a village, but the road signs still point to it, west of the road which winds from Goulburn over spectacular countryside via Taralga, the Abercrombie River, and Black Springs to Oberon.

“Golspie” was the farm owned by George Murray, a native of Sutherland, Scotland. He was born at Loch Shin near Lairg in 1818 to George Murray and Kate McDonald. The family relocated to Golspie at the time of the infamous Highland clearances. In his new book, Set Adrift Upon the World, James Hunter describes some of the trouble which accompanied the clearance of the people from this area. It is small wonder that the Murrays and most other residents left Loch Shin and moved to places like Golspie where the estate management had decided was to be the new place of settlement.

From the list of male convicts who arrived in the colony of New South Wales on the Moffatt on 30 August 1836 it appears that the 18 year old George Murray (the younger), a Protestant farmer’s boy, was convicted of shop breaking in the Inverness Court of Justiciary on 23 April 1835 and sentenced to seven years transportation. He was described as ruddy and freckled with brown hair and hazel eyes; his distinguishing marks were a horizontal scar over his right eye brow with a scar over the inner corner of the same and with a scar on the back of the lttle finger of his left hand. After various assignments in the colony he met Margaret Cameron, a native of Ardnamurchan, who had arrived in Sydney in 1838 with her parents, James and Catherine, and eight siblings as free bounty immigrants. George and Margaret were given permission to marry and did so in the Presbyterian church in Goulburn in July 1841. They lived first at Strathaird near Taralga where their first child was born in 1842. Their next eight children are recorded as born at houses, their’s or neighbours’, named Strontian, Cutty Cuttgang (or Cutty Gutty-ang), or Lairg. The last child, Ann, was born in 1861 at Golspie, by now the accepted name of George and Margaret’s farm.

Golspie seems to have been the place to which mail for the surrounding farms was delivered. Perhaps it was convenient to the postman’s route, or perhaps Margaret was a kind hostess for postman and neighbours alike, maintaining the long tradition of Highland hospitality. It became common practice for local farmers to append “Golspie” to their addresses and when in December 1872, locals petitioned the Postmaster General of New South Wales for the establishment of a post office it was clear that Golspie was where it was wanted. The petition was supported by the Presbyterian minister in Taralga and the postmasters at Taralga and Fullerton. Against the wishes of the postmasters at Laggan and Tuena, on 8 April 1873 the Postmaster General approved the establishment of the post office. George Murray was offered the position of postmaster at a salary of £16 pa; he commenced duties on 1 May 1873.

After twenty-five years in the position and at the age of 80, three years after Margaret’s death, George tendered his resignation in October 1898. His handwriting was still clear and firm as his resignation letter shows, notwithstanding that the transportation records show that at the time of arrival in the colony he could read but not write. 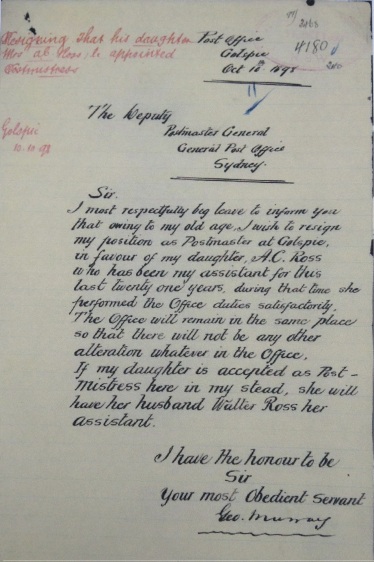 Image from National Archives of Australia

On George’s recommendation, his daughter Ann, married but apparently still living at Golspie, was appointed as postmistress. She had been helping George for the past twenty-one years.

Papers in the National Archives of Australia show an ongoing correspondence between Ann and various officials over the allowances which should be paid to her, with Ann suggesting that she would resign if matters were not arranged satisfactorily. By January 1915, she had been paid £19/5/- and in the previous year had earned £3/-/9 for telegraphic and telephone duties. At this time, Ann had to prompt her superiors to pay a promised increase of £2/10/-, threatening that if it were not paid “I shall have to throw up the whole thing”. It was paid. The post office continued to be operated, sometimes by members of the family, until its closure in 1990.

George died on 29 December 1906, at the age of 88, having survived Margaret by some eleven years and nine months. Each died at Golspie and they are both buried in Stonequarry cemetery in Taralga, half a world away from their origins in Sutherland and Ardnamurchan. 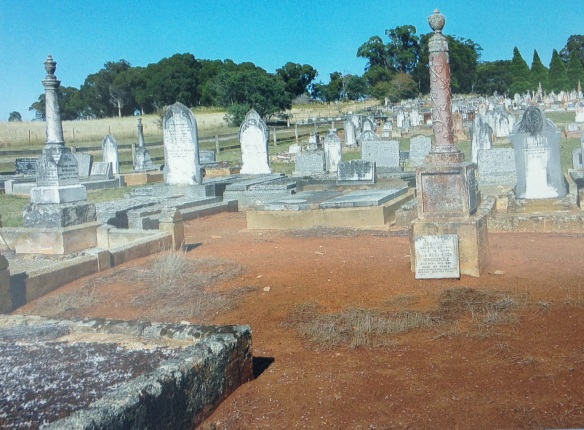 The Presbyterian section of the Stonequarry Cemetery in Taralaga, with the Roman Catholic section beyond. (Photo: Judith Matthews)

This is an updated version of the original item posted on 14 March 2016. With thanks to Barbara Kernos for alerting the writer to the convict records concerning the young George Murray.

5 thoughts on “A Man of Letters”