Alison Kennedy, a fourth year Scottish History student at UHI, writes about her experience of a fieldtrip in Sutherland.

Recently students and staff from the Universities of Highlands and Islands and Aberdeen, met in Helmsdale to explore the landscape of the clearances and other historic sites in the Strath of Kildonan.

First stop was Lower Caen which was the subject of a community archaeological excavation in June 2013. The dig focused on the final phase of occupation and the abandonment of a longhouse and its outbuildings. Later, displayed at Timespan’s Museum, we saw some of the artefacts discovered at the township: pottery, the remains of shoes and parts of a whisky still. The site is up a steep incline from the road and the settlement would have been exposed to the elements. Often cattle were kept under the same roof as the family, especially during the severe winter months. In the spring of 1807 200 cows, 500 cattle and more than 200 ponies died in the severe conditions in Kildonan alone.

Next stop was Kilphedir and the clearance settlement of Chorick. Here we are in the corn drying kiln!

These were often built into the slope of the hillside and were used to dry cereal crops. At Eldrable, on the opposite side of the River Helmsdale, we spotted horizontal cultivation terraces which farmers had used to grow their crops. Some agricultural critics suggested that terraces like these produced poor crops and encouraged farmers to draw furrows up and down the slope to improve drainage. 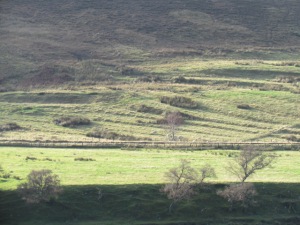 We then stopped at Baile an Or, site of the Sutherland gold rush in 1869. Robert Gilchrist’s find of an ounce of gold, worth £3, prompted a host of prospectors to arrive. Now no evidence remains of the extensive settlement of rough huts built to house as many as 500 hopeful people.

Last stop for the morning was Ach-na-h’uaidh at the southern end of the Strath of Strathnaver. The Rev. Sage preached at this meeting house for the last time in 1819 when he and his parishioners were cleared to make way for sheep farming. The walls and adjoining graveyard partially survive, together with three headstones marking the final resting place of some shepherding Chisholms and a Gordon. 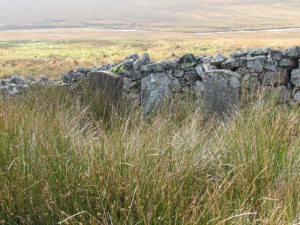 Our picnic lunch was eaten in the shelter of Kinbrace Cemetery’s wall as we endeavoured to find a spot away from the wind. A circular sheepfold stood in the distance, and a brightly coloured corrugated iron roof of a disused shepherd’s house was a few yards away. One of the table stones in the graveyard is dedicated to George Grant who died on 1 May 1857. George served with the 93rd Sutherland Highlanders at the Battle of New Orleans in 1815. Many men from Kildonan were away serving with the regiment when the Clearances swept through their native land. 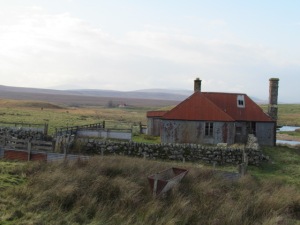 Retracing our steps, we visited the broch at Upper Suisgill. Many of the stones used in the construction have been robbed to use elsewhere but the remains, measuring 12m in diameter and walls up to 4.5m thick, show what an impressive structure this must have been.

Our last stop was Kildonan church where a sermon on the clearances and emigration was preached by Professor Marjory Harper from the imposing pulpit to all the students. Today the church is used for special services and events. The plaque commemorates George Bannerman of Kildonan, great-grandfather of the Right Honorable John G. Diefenbaker, Prime Minister of Canada 1957-1963, whose ancestors probably came from the nearby township of Learable, as well as commemorating the settlers who migrated to the Red River Settlement.

Arriving back at Helmsdale we had a look at the exhibits in the excellent Timespan Museum and Arts Centre and immersed ourselves in the virtual world of the reconstruction of Caen township.

Part of the Diaspora Tapestry

Our day finished with visiting the Scottish Diaspora Tapestry Exhibition hosted by local needle-workers in Helmsdale Community Centre. It depicts Scotland’s global legacy through tapestry. Although by now dark, our goodbyes were made fittingly under the Emigrants’ Monument erected in memory of the people who went to the Red River Settlement. A very enjoyable day!