Clive Hayward writes this week about the building of “The Mound”, that critical piece of engineering between Dornoch and Golspie.  Clive has just completed his first year of study on the MLitt in Highlands and Islands History at the University of the Highlands and Islands.  As ever, we welcome comments, queries, questions and corrections in the comments section.

Thomas Telford and William Young appear unlikely bedfellows, one being a celebrated engineer and the other being an infamous factor of the Sutherland estate associated with the Clearances.  However, their collaboration to implement the Sutherland Road Act of 1805 has left a monument to their achievements.  The original road ran along the east coast of Sutherland crossing Loch Fleet at the Little Ferry and the Dornoch Firth at the Meikle Ferry.  The creation of the parliamentary road removed two major obstacles by bridging the Helmsdale River and the Dornoch Firth at Bonar, but in between was the tricky passage of Loch Fleet.  Thomas Telford, the consulting engineer for the Commissioners for Highland Roads and Bridges, originally envisaged building new piers for the ferry as the construction of a traditional bridge was out of the question.  William Young however proposed a causeway across the estuary at the Mound.  The Commissioners initially baulked over the price of the estimate but when the Marquis of Stafford offered to contribute to the cost of the project, the proposal was accepted.

The Marquis was greatly interested in improving Sutherland’s infrastructure and was a major contributor to the finance of new roads. The construction work also offered employment to the local population, recently displaced by the “improvements” undertaken by the estate. Contractors however were hesitant to submit estimates for what promised to be a difficult operation.  Only two were forthcoming (one being very high whilst the other contractor was not regarded as being sufficiently competent), and the whole venture was in doubt.  Young persuaded Earl Gower (the eldest son of the Marquis) to intervene and an offer to undertake the Mound was submitted to the Commissioners by the Earl, in partnership with Young and his associate Patrick Sellar.

To cross Loch Fleet, which is a tidal inlet of the sea, Telford designed a huge earth causeway almost 1000 yards long. The plan was to start by building a stone bridge, with sluice gates, close to Craigtoun rock, on the northern side of the bay. The engineers decided to start work on both banks simultaneously and meet in the middle.  To get the stone and timber to the shores of Loch Fleet they constructed a horse drawn railway.  Difficulties in finding a rock base for the foundations delayed the project beyond the estimated one season and, just as it was nearing completion, a strong tidal surge put a hole in the causeway.  Telford decided to widen the whole causeway and despite much anguish the two ends were finally joined together. Construction work on this huge project began in 1814 and was completed by June of 1816.

The bridge originally had four arches, although this was later increased to six. Each contains a sluice gate preventing sea water travelling upstream when the tide comes in but allows river water out as the tide falls. These gates are self-regulating, but to cope with the river’s spate there is a mechanism of winches and pulleys to manually lift the gates. This was installed, again under the direction of Thomas Telford, in 1833. Winch houses were built at either end of the bridge and a cottage for the gate keeper was built at the northern end of the crossing. The causeway and sluice gates stop the sea over a mile short of its natural high tide mark. This had a dramatic effect on the environment upstream of the Mound. The build up of silt in the shallow fresh water created the ideal conditions for alder and willow trees. The Mound Alderwoods is now one of the largest of its type in Britain and is a designated nature reserve. The other effect of the building of the Mound was to make the ancient ferry crossing at Little Ferry on the mouth of the loch obsolete. 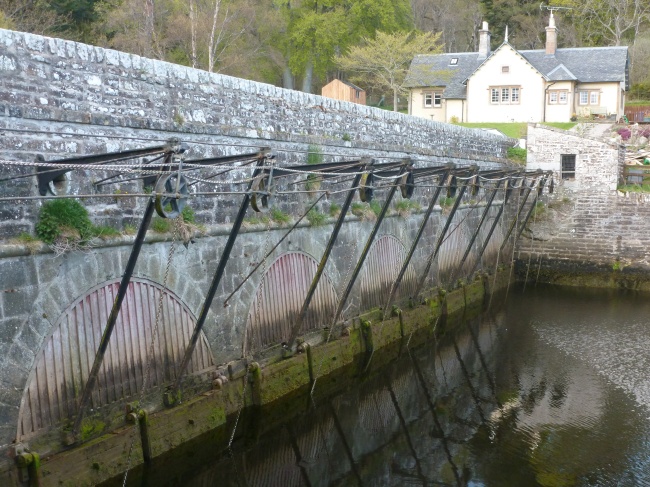 Image from the collection of Elizabeth Ritchie

As a major construction project in 1814, it was second only to the development of the coalmine at Brora in injecting large amounts of capital into the Sutherland region.  The total project cost £9749, more than sixty per cent being spent on labourers’ wages. When the Marchioness visited the project in August 1815 she found: “sixty people at work and 150 expected the following week.”  It is hard to overestimate the project’s importance in creating work, albeit temporary, in an otherwise non-industrialised environment.

The Mound was one of William Young’s crowning achievements.  Despite Telford’s oversight, the construction, planning and day to day working was in the hands of amateurs and relatively unqualified workmen.  Young was in no sense a trained engineer but he battled through the project from start to finish and it is a testament to his tenacity.

5 thoughts on “Building “The Mound””